Previously the NFL data for the NFL Dashboard just had the last 6 games from each team from last season (2019).

Now the data has been updated to have the last 6 games of pass, rush and total yards data for each team during the 2020 season.

This dashboard now can show the trending performances of two different teams you are comparing with the most up to date data.

There are also new metrics shown in the dashboard.

Now displayed under the results of the last 7 games played against the two selected teams, is the win-loss-tie record of each of the selected teams.

Above in green is the team averaging highest net yards over the last 6 games, here it’s the San Francisco 49ers.

This may not be accurate or a good indicator for this coming Thursday game since Jimmy Garoppolo is out and was a factor in contributing to the total offensive yards for the 49ers, although still somewhat telling because the defense yards are taken into account.

Besides that the data in the bottom six graphs have now been updated to 2020 data and will be automatically updated as more games are played throughout the season.

A quick look at the teams new 2020 data graphs going into the thursday night match-up, 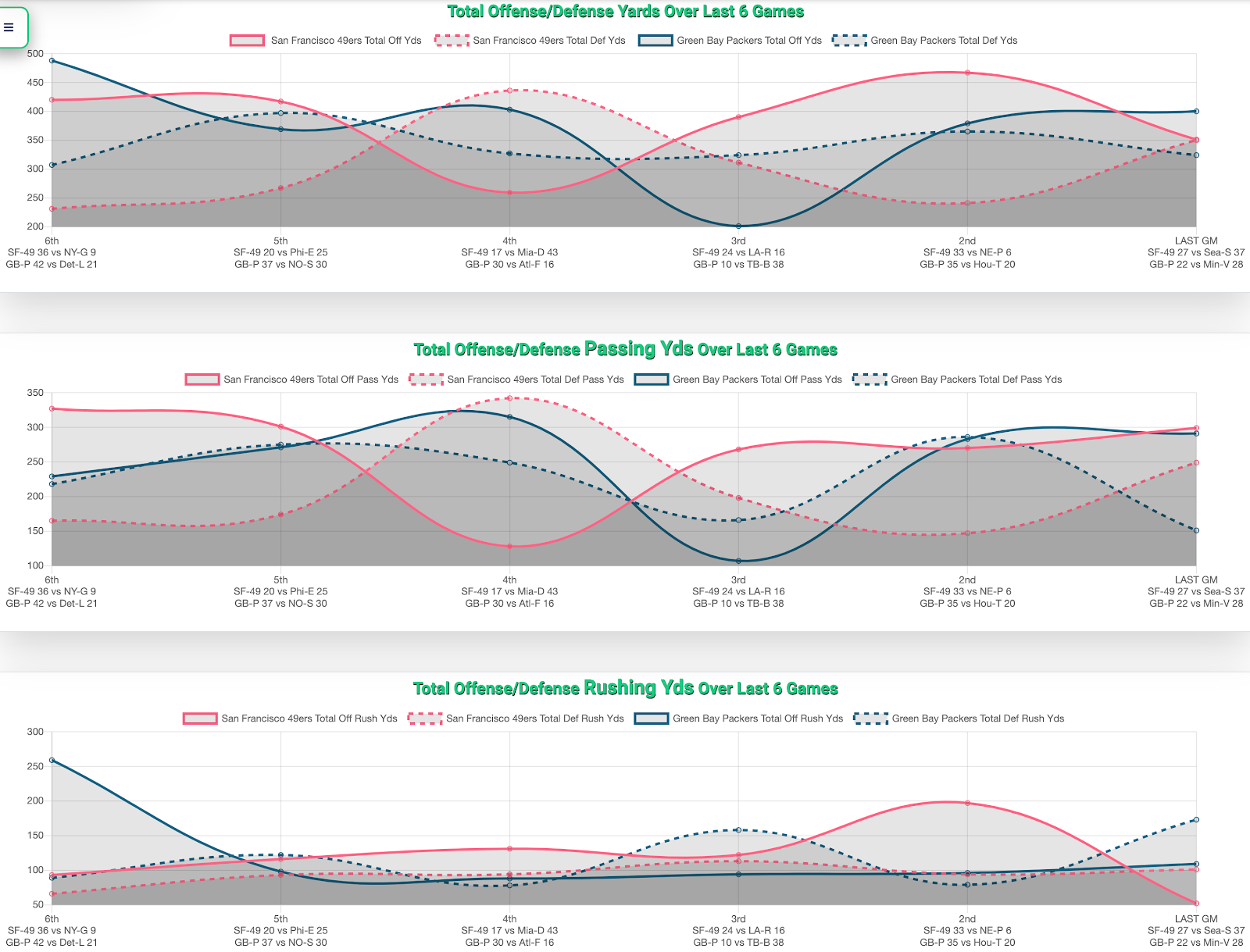 We see that San Fran’s numbers for total yards are skewed higher because they played an easy opponent in the New England Patriots, followed by a loss to the Seahawks. We can also see how a loss to Tampa Bay from Green Bay skews their numbers a bit in the wrong direction, from the visualizations, I think that the packers have more of the momentum coming into this game.

But that's an example of why it's important to look at the trends of each team over the last few weeks to see how they are performing overall (Packers look better in trending manner and when accounting for outliers), I think this game will still be competitive however, just tougher to call with San Fran missing George Kittle and Jimmy G, which makes sense to why Packers are favored by 5 and a half points.

Also note that Covid-19 is effecting the 49ers for this game, after they placed 4 on the covid-19 injury list https://www.espn.com/nfl/story/_/id/30259169/san-francisco-49ers-put-4-covid-19-list-ahead-green-bay-packers-game, making it harder to predict the outcome of this game.

Check out the rest of the NFL team matchups well below.